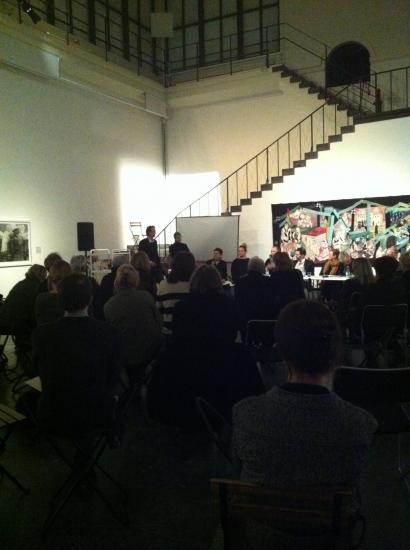 Urban planning practice comes close to an exercise in therapy. Last night, the Swedish Association of Architects (Sveriges Arkitekter www.arkitekt.se) organised a rather large collective therapy event for the damaged souls of Stockholm’s architecture community. A spot of last-minute consultation for the draft policy for architecture, ‘Arkitektur Stockholm’ (an addition to the översikstplan, Promenadstaden), provided the perfect opportunity for Stockholm’s architects to air their grievances, expose and explore their hopes and dreams, jostle for position, make themselves heard, and ultimately do what architects do best: talk about architecture in the company of other architects.

With Bjarke Ingels distracting all the kids down at the School of Architecture at KTH – the title of his lecture, ‘Hedonistic Sustainability’, gave a taste of the show that would surely follow – we were by far the youngest people in the lush and sombre space of the main hall of Liljevalchs Konsthall. Being young (experienced as a disconcerting ‘cuteness’ in these kind of friendly get-togethers) gave us an excuse to get stuck into the champagne and to push some infantile ideas like ‘politics’ and ‘production’, however the speed-dating format of the round-table discussion tended to emphasize trite one-liners (ours included) and exclude a careful consideration of the structure, mechanics and ambitions of the Arkitektur Stockholm policy document. All in all, our general impression of the night constituted a choppy collage of soundbytes, which the concluding summary by the moderators largely failed to narrativize, critique or clarify.

So, whilst impressed by the palpable concentration of power in the room, we left feeling somewhat unfulfilled – it was hard to say whether the therapy had worked, whether old neuroses had indeed been quashed or whether rather on the contrary a sense of paranoia had simply spread. What was the problem with architecture in Stockholm? Was there a problem, and if so what could be done about it? By who? Was, in fact, architecture itself the problem? Or, worse, was Stockholm? We retreated to a bar to try to reformulate our position in what had become murky water, speculating briefly about why recovering alcoholics might possibly find comfort in meeting in “groups” composed of others with the same problem. When it comes to group therapy for Stockholm’s architects, it seems to us that the therapist (the City) might have to be more proscriptive in elucidating workable strategies for behavioural change, and – first and foremost – clarify the diagnosis upon which the treatment is based…

The event was attended by Helen Runting and Rutger Sjögrim of Svensk Standard.